What if you took two classical board games - Minesweeper and Battleships - and combined them into one nautical strategy game?

Challenge your friendliest enemies in this game of strategy and puzzle, based on the number game that is surprisingly simple once you figure it out.

Both players start by placing out the mines on the opposite player's board. Be wary of where you place your mines, as a lot of the game can come down to mine placement.

When the game begins, each player takes turns in clearing their board. When a tile is pressed, it could either be shown as an empty tile, a numbered tile or a mine tile. If you pressed a mine tile, you have exploded and the game is over. If you press a numbered tile, the number that shows up (between 1-8) shows how many mines are neighbouring that tile.

First player to clear their board wins!

The game only requires you to use the mouse. Click a tile to uncover it and hope for it to be a clear or numbered tile.

If you find it difficult to remember where the mines have been placed, you can mark the unpressed tiles with flags. This is done by right-clicking each tile you suspect to be a mine.

This game allows for the user to change different settings to alter the difficulty of the game. The player can for example change the board sizing, the amount of mines on the field, if there should be a turn timer on or not, as well as if "Question Tiles" should be active.

One of the difficulty settings is for enabling "Question Tiles". This allows the player to take one of their turns to replace a clear or numbered tile on the enemy board with a question mark. A strategically placed question tile can throw off a player's flow completely.

The game is best played against a friend. Because this is a split-screen turn-based game, go by gentlemen's rule of not screen-peeking when your friend is placing mines on your side.

However, if you are playing alone, do not fret as you can still play this game against an AI.

This game was developed as part of Grads in Games "Search for a Star" initiative. The basis of the project was that of Minesweeper, and thusly the Minesweeper code is based on their pre-existing project.

This game is great fun, trying to beat out the AI in the fast modes can be super intense! 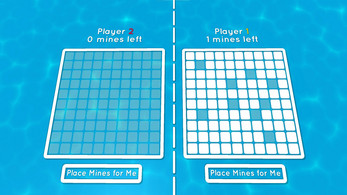 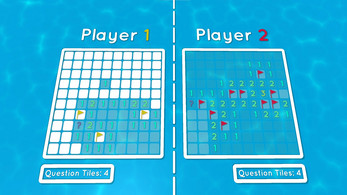 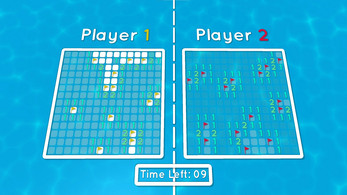 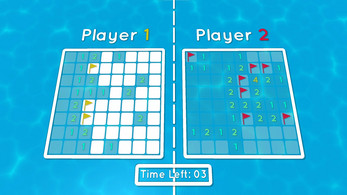